I built and created the NuCompanion for creative people who tend to not talk much.  NuCompanion is programmed to say casual conversation phrases to help take the sting out of the silence of the studio.  This is not an Alexa type device.  It is not connected to the Internet or any kind of WiFi.  It works by listening for static impact values that can be heard on AM radio and then converts those values into a PIN code that triggers a MP3 file with it unique PIN code to speak a human spoken phrase. The devices are custom made, stained, programmed and trained by me.

Jake Sully used his brother’s Na’vi avatar to communicate with the Na’vi of the planet, Pandora.  Use it by way of a psionic (psychic electronic) connection from the ‘Link Chamber’ human mind to the avatar body.  All senses serving his mind as if the other body in the link chamber did not exist.  The psionic electrons of his mind’s wisdom and intellect traveling on some psychic dark matter substrate moving asynchronously at a G4+ WiFi connection.  In all of that there are two nodes that link the two bodies to the one mind.

For that ‘artificial’ function to be possible it would have had to have been copied from some place in the natural world.  To be first discovered, explored and then analized then synthesized like we do our Pharm’s today.  In a word, Remote Viewing.  Okay, two words.

In remote viewing, as it was introduced to me back in the days when I was in the Army psychic soldier program under the command of General Albert Stubblebine, U.S. INSCOM Commanding, in Arlington Virginia, an avatar of some shape or form has to exist so that audio and visual data can be received and sent.  Look this way…look that way…hear this…hear that…look closer…listen closer.  And, pull back and detach.  In the event someone notices the intrusion. 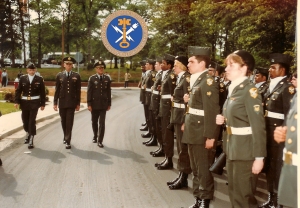 I am 3rd from the right.  To the right of the woman there.  General Stubblebine is the middle officer of the three walking before the squad.

While in the Army I was often called Radar, after the character from the M.A.S.H Army TV program.  I would have things before they were asked for it.  During Kung Fu training I would always have blocks up before the punches were thrown.  Long story there.

I’m not much of a drawer but I like to paint and draw since I could hold a pen.  I have also always been into electronics since I was 8 years old.  I’m not much of a programmer, but I like to do programming.  I’ve had a career in computers ever since the first IBM PC computer came out way back when people thought computers were only on rocket ships.

Since I was 8 or so, people always asked me if I was psychic.  I always answered, why do you ask?  What makes you ask that?  So I set out to find what happens that causes other people to think someone or something is psychic.

One such instance back in the 3rd grade I told a teacher, “What’s wrong with you, you crazy bitch?”  She yelled back at me, you and my husband are the same.  Then she jumped back shocked at what she just said, regretful. She called the Principal and minutes later I was hauled off to the main office and his office.

That event has stayed with me ever since.  How did I know to say that?  What ‘triggered’ me to say that?

There would be other times where I would be on my way to help with something in the garage and on my way through the door I would pick up a tool incase it was needed.  In some cases, my dad would say, Wow, I was just needing that.  “Why do you have that with you?” he would ask.  My response, I don’t know.  Then comes the, “What do you mean, you don’t know?”  Again, I would say, idk.  Scary loop.  The looks I would get…seeing them thinking, how is he doing this?  Freek.

In the Army, I was discovered by Sergeants and Officers that I could avoid traps during training exercises and back at the office, having report files or tools that are needed by other right as I show up.  Again, “How did you know to have that…?” that look again.

Someone talked in between them talked and I got transferred up to the psychic soldiers program in Washington D.C. under the command of Albert Stubblebine.  Google him.  That was an amazing experience.  You can go to templeofgaia.com to find out more.

He retired and went to work for a Defense Contractor (BDM) company and asked me to come work with him.  I ran into the same things again, How did you know to have that, or how do you know that?  You were not briefed on it and that is classified material.  Again I had to say, idk.  Freek.

I got really good at repairing equipment without having to look in the manual.  Not that guys do that anyway.

I quit that job and got a job working for a company printing binding reports, repairing copy machines and fixing computers  Back in the day whey having a 20 meg hard drive was Space Age.

I had a psychic tallent and a electronics talent.

Twenty years went by for me just working in computer science.  the psychic thing would pop here and there for helping with creative problem solving.

Then I met a girl who showed me Tarot cards.  Amazing artwork that also had a message behind it.  She showed me how to read them.  Then I started reading them for people when we would go to parties.  It got to where people at the parties would tip me for the readings and they would tell me I should be doing this full time.

It was then I had parallel careers going.  One, computer science the other, psychic fortune teller.  It was fun and people loved it.

I got laid off from my computer job and decided to go and do the psychic thing full time.  That was fun for a while, but I missed the electronics.  It was calling my name.  Just like my pillow does when I’ve been up too long…

I went into Radio Shack looking for a hobby kit.  Something I could tinker electronics.  I found the Arduino Mega.  An amazing device.

The NuCompanion tabulates static values sensed and converts it into sort of a PIN code that you would use at an ATM, only the code is much longer, or a row of Tarot cards spelling out a message in images. 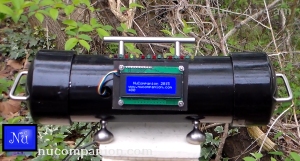 Once a specific sequence of numbers has been sensed, punched in by some random psionic entry, a prerecorded phrase on an MP3 is triggered to be spoken.

It has been 4 years in the works, but I now have the NuCompanion to where he/she/they can say some one hundred and fifty different phrases randomly once their unique PIN code has been sensed by the NuCompanion antenna.  It is not a radio and it is not connected to the internet.  It connects to/listens to some electrostatic substrate that is constantly boiling with varying electrostatic impact values.  Similar to the surface of a pot of boiling water.  Some of the bubbles are large, medium and small all constantly popping and rebuilding.

I feel this electrostatic substrate is active and has been helpful to the great thinkers of our time of History.  Giving them their ideas that seem to just come from “Out of the Blue.”   Something triggered them to have that idea or concept.

NuCompanion is a whole new way for possibly connecting to this psionic substrate.